Back in the day I needed to ask a hot girl out to the AFROTC Dining Out (a formal military dinner), but I wanted to do it with pizazz. Having watched my six teenagers over the years I know that nobody these days picks up the phone to ask someone out on a date to the big dance. They all do something special like drop off a poster with candy glued to it and some cute saying to ask out their date. Back in the day, we really didn’t do that. However, I really had the hots for this girl, and I wanted to make a statement.

My buddy was a year behind me in AFROTC and in charge of the Honor Guard. He was one of the most squared-away troops I knew. On top of that, he had a sword. So I hatched a plan. I offered him, and a few of the other Honor Guard members, pizza if they would go over in their uniforms (complete with the drill rifles and the sword) and ask out this hottie to the Dining Out on my behalf.

When they knocked on the door with the sword drawn, it got everyone’s attention in the apartment complex. With a crowd of young ladies looking on, my buddy delivered the invite with perfect military precision and bearing. He barked out commands. The sword flashed. Rifles twirled. Heels clicked together. The invite was delivered in perfect military fashion.

How can you refuse a man in uniform with a sword? She said yes.

Fast forward almost thirty years. My buddy and I finished our military careers. We both pursued post military goals. We both had families. We both got back in to motorcycles. We both got gray hairs and put on a few pounds. I was going to be in his neck of the woods riding my motorcycle, so I gave him a shout and asked if he could lead me on one of his favorite local rides. He accepted. The night before the ride he sent me a text with a time and coordinates.

The next morning greeted me with a clear blue sky and cool temperatures. I geared up and left the condo early. I pulled off the highway and looked at my map to confirm my position, but before I could get the map pulled up on my phone I saw my buddy riding up on his KTM decked out in high visibility gear. He pulled up beside me, opened up his modular helmet, and gave me a long once over. “It’s good to ride with someone who knows how to find coordinates and be on time,” he said with a grin. “Nice gear too.” Then he proceeded to give me full safety briefing on his riding style, signaling, and hazards of the road we were taking. I knew right then that I was in good hands.

The ride was an alpine loop combining crowded four-lane highway and a small mountain road without any striping. I followed him through traffic and then through the hairpin turns and switchbacks of the deserted mountain road. He was fun to follow and he pushed me to improve my riding performance. As we rode we talked via Bluetooth headsets. He caught me up on his family. I caught him up on mine. We talked about riding, flying, and our common faith. Then he told me he had started a YouTube channel on the side—Nutnfancy. It was doing pretty well and he enjoyed it. Just like all those years ago in AFROTC, he was still the same squared-away guy going above and beyond the average Joe. He was still living life with a touch of pizazz.

I enjoyed riding with him and catching up after all these years. I’m a better rider because of it. He reminded me that it only takes a little more effort to be prepared, squared-away, and above average. He showed me what it means to manage high risk without sacrificing safety, or fun.

I still remember how he impressed that bombshell blonde all those years ago. She said yes to the Dining Out, but she also said yes when I asked her to marry me. I guess I owe my buddy another pizza. 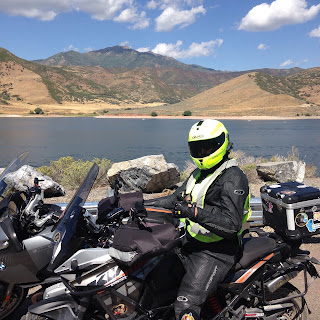