Candy For a Funeral

I arrived at Sweeties, a candy store, dressed for a funeral. Most people bring flowers to a funeral. I was bringing candy.

My friend Dave had died.

Dave and I met years ago. He was intelligent, caring, and intensely curious about the world. We began a friendship, but not the casual friendship. He was not the type of friend that discussed casual things. He moved past superficial conversation like a supersonic aircraft. We talked about politics, religion, and economics. We didn’t always agree, but the conversation was never dull.

As a lawyer, Dave practiced the ugliest and most contentious kind of law—family law. He was always embroiled in some divorce, custody dispute, or visitation battle. He would often see people at their worst, but he never lost faith in humanity. He never complained about the bitterness and heartache he witnessed every day. Somehow he managed to keep his faith in humanity even when he could see that humanity didn’t merit any faith.

I often felt humbled by my friend’s praise. Dave would gush with effervescent praise about his family and his friends, but not in front of everyone. He did it in private so that you knew he was sincere about his feelings. He wasn’t looking to butter you up with flattery so he could ask for a favor later. He genuinely expressed himself. Sometimes I felt awkward because I didn’t feel I deserved his praise, but I also knew he wasn’t one to offer feigned compliments.

I loved the way Dave defended the underdog and fought for justice, even at his own expense sometimes. If he felt a wrong had been committed, he would use his communication skills like a battering ram in an effort to break down the door of injustice and take the castle by storm.

Then a few years ago, we all noticed a change in Dave. His conversations became a bit more pointed. His demeanor became slightly more caustic. He withdrew from social interaction more than usual as his mood darkened. Being his friend became more difficult. We all wondered what had caused the change in his personality.

I didn’t know exactly what to do, but I tried not to let this shift in personality change our friendship. I didn’t see him as much, but when we did have interaction, I tried to make him feel like a friend. In spite of the changes he had experienced, he never stopped being my friend.

A few months ago, doctors discovered a tumor in Dave’s brain.

Now it all made sense. The tumor had affected him in invisible ways that were then manifested in his behavior. He was literally dealing with a demon in his brain, but didn’t know about it. Unfortunately that demon could not be exorcised and eventually it took Dave’s life.

I’m glad I gave my friend the benefit of the doubt when his behavior changed. I’m glad I didn’t judge him too harshly when he withdrew from social interaction. I’m glad I continued to treat him as a friend, even though we didn’t interact as much as before. I tried to accept him where he was and be his friend.

We never know what demons are battling in the minds and souls of the people we meet. We often cannot see or understand the internal conflict that is raging in the hearts of those around us. It’s okay to set up boundaries when dealing with difficult people, but we must exercise kindness, tolerance, and patience if we hope for others to proffer us the same virtues when our inner demons have taken us captive and are wreaking havoc with our emotional world.

I went to see Dave in hospice before he died. We talked for a while, and the conversation was anything but casual. After a while his eyelids drooped and he told me he needed to take a nap. I asked if I could bring him any special food, and at first he declined, but then he asked for this special candy—a gummy candy that looked like a raspberry. He explained that I could only find it at Sweeties. I went and bought him five pounds of that candy. A dying man shouldn’t have to worry about his diet. He ate some of that candy every day until he finally passed.

I took candy to the funeral of a friend. It was sweet sorrow. 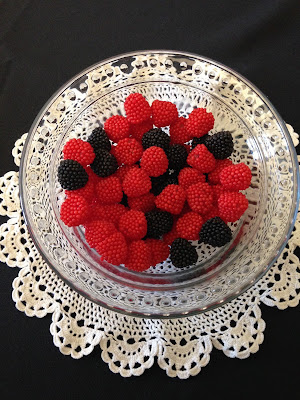