I read in the motorcycle handbook that a motorcycle rider is sixteen times more likely to be injured or killed in an accident than someone driving a car. And yet, here I was straddling a BMW K1200LT (affectionately christened by my daughter as “Charlie Brown”) hauling down the Kentucky highway. I hoped the day would be at least seventeen times more fun than driving.

The temp was twenty-six degrees when I woke up. It wasn’t supposed to get below freezing during the night, but then again we are talking about the weather, and it was the year they invented the word polar vortex. The thought of sitting by the fire all day instead of riding did cross my mind. Besides, I could hear every you’ll-shoot-your-eye-out lecture I had received since I announced that I was buying a motorcycle running through my head. Whatever impulse made the first cavemen leave the fire and venture out into the unknown was thumping inside of me. I had Raisin Bran with raw whole milk for breakfast. (It was the closest thing in the house to Wheaties.) I took my vitamins, trying to be health conscious. (I wouldn’t want to put my health in danger.) Then I geared up for a cold-weather ride and headed up to the shop to get Charlie Brown and head out on the highway.

It was thirty-one degrees when I walked out the door, but the sun was shining. I could see that large chunks of the gravel lane were covered with snow. I had to get the bike out of the shop, up a hill, down a hill, around a bend, and all the way to the asphalt highway that bordered the front of the farm. The highways and roads were clean and dry, but because it got below freezing again during the night, I had several sections of snow-covered driveway to traverse before my tires would find dry asphalt. I had visions of getting five feet and dropping the bike in the snow. I thought of various ways to avoid it, but most of them were ineffective or simply returned me to sit by the fire. I uncovered the bike and slipped on my helmet worried that I would slip on the snow and end up in the corral behind the barn with the cows instead of on the asphalt highway calling my name.

I figured I had to make it uphill through about ten yards of snow and then I would probably make it. I backed Charlie Brown out of the shed and pointed him up the hill. No time like the present. I took a deep breath and let it go. Of course that fogged up my visor and I had to open my visor and let it clear. I took another deep breath. I feathered the clutch and started up the hill. The snow and ice crunched beneath the new tires. I kept my feet close to the ground, but I knew if the bike started to go, I would have to let it fall. (You don’t catch a BMW K1200LT weighing over seven hundred pounds.) To my relief, the tires held, and I eased up the hill and onto the gravel. I breathed a sigh of relief and fogged my visor again.

The next phase was getting down the hill and around the icy corner. I steeled my nerves and popped the clutch. I kept it slow and eased onto the patch of ice. Luckily, the ruts were deep and kept me from spilling the bike and I made it to gravel again. I breathed another big sigh of relief and kept the bike moving towards the highway. At last I could see the black, dry asphalt ahead of me, but ten feet of ice lay between me and a day of riding with my brother. I held my breath. Just as the back tire began to slip, the front tire made it onto the asphalt. I was free! 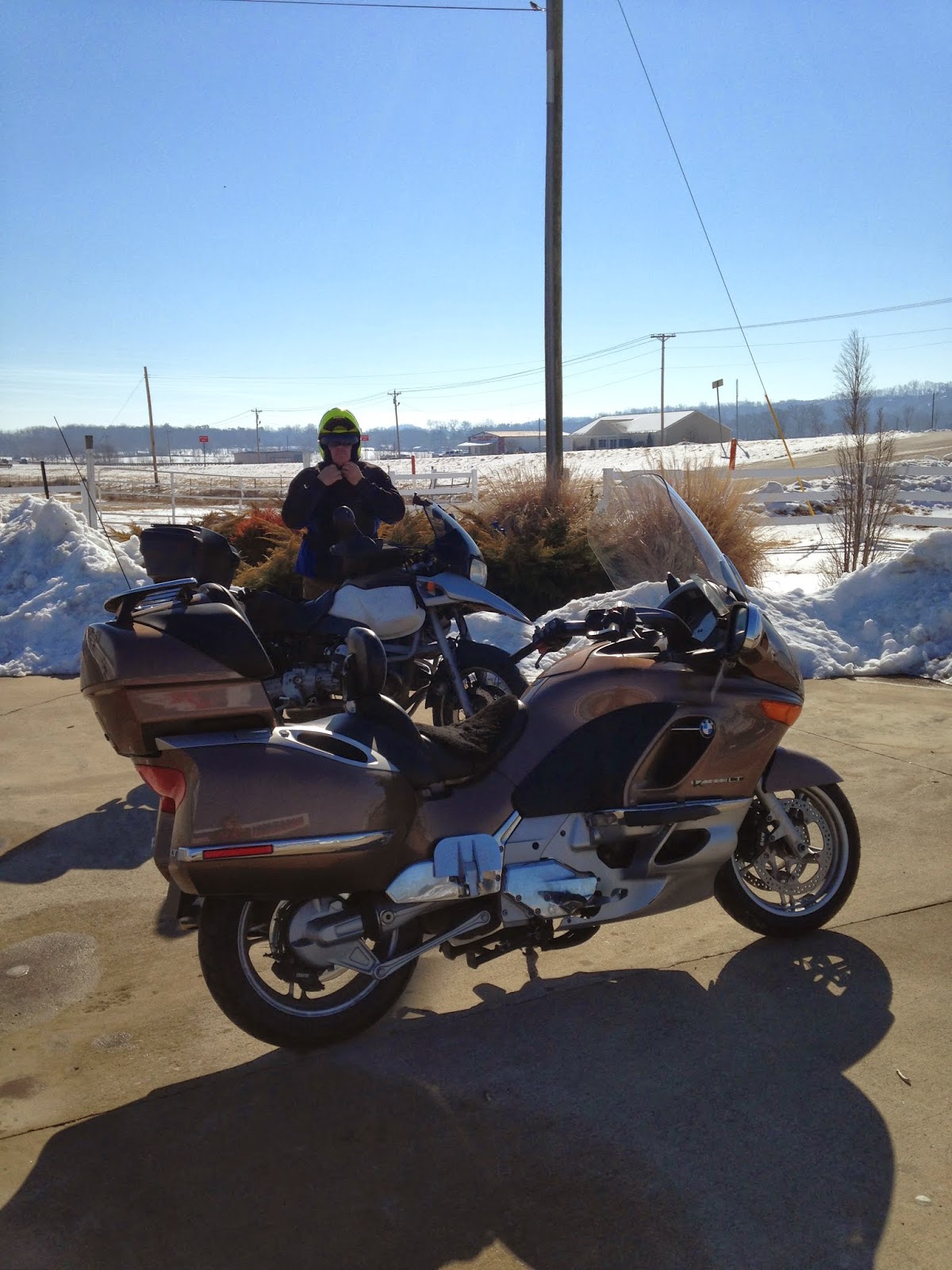 The ride to my brother’s house was smooth and I was grinning from ear to ear when we pulled out of his driveway. We were headed over to Western Kentucky to see my Granny and I was excited to spend some time on two wheels cruising down country roads. The sun was out and I was bundled up, but the first part of the ride was cold. I had the windshield all the way up to block the wind and the heated handgrips were on their highest setting, but the chill, and worrying about crashing, made me tense. I was tense and worried. I kept hearing the same you-will-kill-yourself lecture going around and around in my head. I knew that if I injured myself in a crash, my wife would kill me.

Riding a motorcycle heightens your senses. I felt the wind whipping over the windshield and welcomed the sunshine as the sun climbed in the morning sky. I could feel the curve of the road along with every climb and descent. I took in the vistas of fallow fields and evergreen trees mixed with the barren trees of winter that bordered the fields and roads. The ride heightened my sense of awareness, my sense of enjoyment, and perhaps my sense of pain if I crashed.

People in Kentucky are very religious. I enjoyed all the quotes on the church marquees as I rode past – A clear conscience is a soft pillow. ASAP – Always Say A Prayer. WDJD – What Did Jesus Do. Jesus Saves. (I’m not sure if could save me from my wife if I got killed while riding a motorcycle.) As I came around one curve someone had posted a sign in the yard – Prepare to meet God. I was prepared to meet God, but I was hoping it wouldn’t happen that day on that particular curve. I slowed down a bit.

I followed my older brother around Russelville, past the Jefferson Davis monument (Why did we build a monument to the loser?), and over to Hopkinsville. As we entered Hoptown, we passed the state mental hospital and I thought about stopping and checking myself in. Here I was, a grown man, out gallivanting around the countryside on two wheels. Surely, I had lost it. I downshifted and accelerated past.

We made it without incident or problem to my Granny’s house. She is ninety-years old and doesn’t get a lot of visitors living so far away from the rest of the family, but she wants to stay in her own home. I say – More power to ya’ Granny. We offered her a ride, but instead we drove her Camry to the local fish place for some fried catfish and hushpuppies. The scrumptious deep-fried meal was probably the most dangerous part of the day. After lunch, we sat and visited while Granny read to us from the obituaries. I was hoping it wasn’t a bad omen before the ride home.

We took the long way home. We cruised over to Muhlenberg county with the words of Roy Acuff’s song echoing in my helmet. Daddy won’t you take me back to Muhlenberg County, down by the Green River where paradise lay… We stopped at the picturesque courthouse to stretch our legs and talked about the old adage concerning dropping a bike or laying a bike over – those who have; those who will. I was hoping that my minor scrape on a Yamaha back in high school would put me in the those-who-have category. We cruised over to Drakesboro, back down through Russelville, and back home to Franklin. My brother pealed off and headed home. I made a stop at the Frosty Freeze for some baby burgers to finish out the near-perfect riding day.

When I turned down the lane at home, I was glad to see gravel, but when I topped the hill and my uncle’s tractor was in front of the house blocking my way. I slowed down, but after a day of riding I decided I could get around it if I swerved up on the berm in front of the house. When I started up the berm, it was softer than I expected. The tires slipped, and for a second, I thought I was going to lay old Charlie Brown on his side right in front of the house, but I kept my cool and made it back onto the solid gravel. I breathed my last sigh of relief. I had made it.

Then I turned the corner to head up the hill, and that patch of ice from the morning was still there, but this time the ruts were gone and the ice was wet. The sign – Prepare to Meet God – flashed across my mind. I panicked and tried to keep my momentum going in the right direction, but in less than a second, Charlie Brown was on the ground.

There I stood after an incredible day of riding looking down at that big beast of a motorcycle laying on its side in the ice and mud. I laughed. I banged my right shin getting off of the bike, but I other than that, the bike and I were fine. My wife was right. I was crazy.

I was prepared to meet God, but thank goodness I didn’t have to meet Him that day. With the help of my Uncle, I righted the bike and put Charlie Brown to bed in the shed.

By the way, It was fifty times more fun than driving. 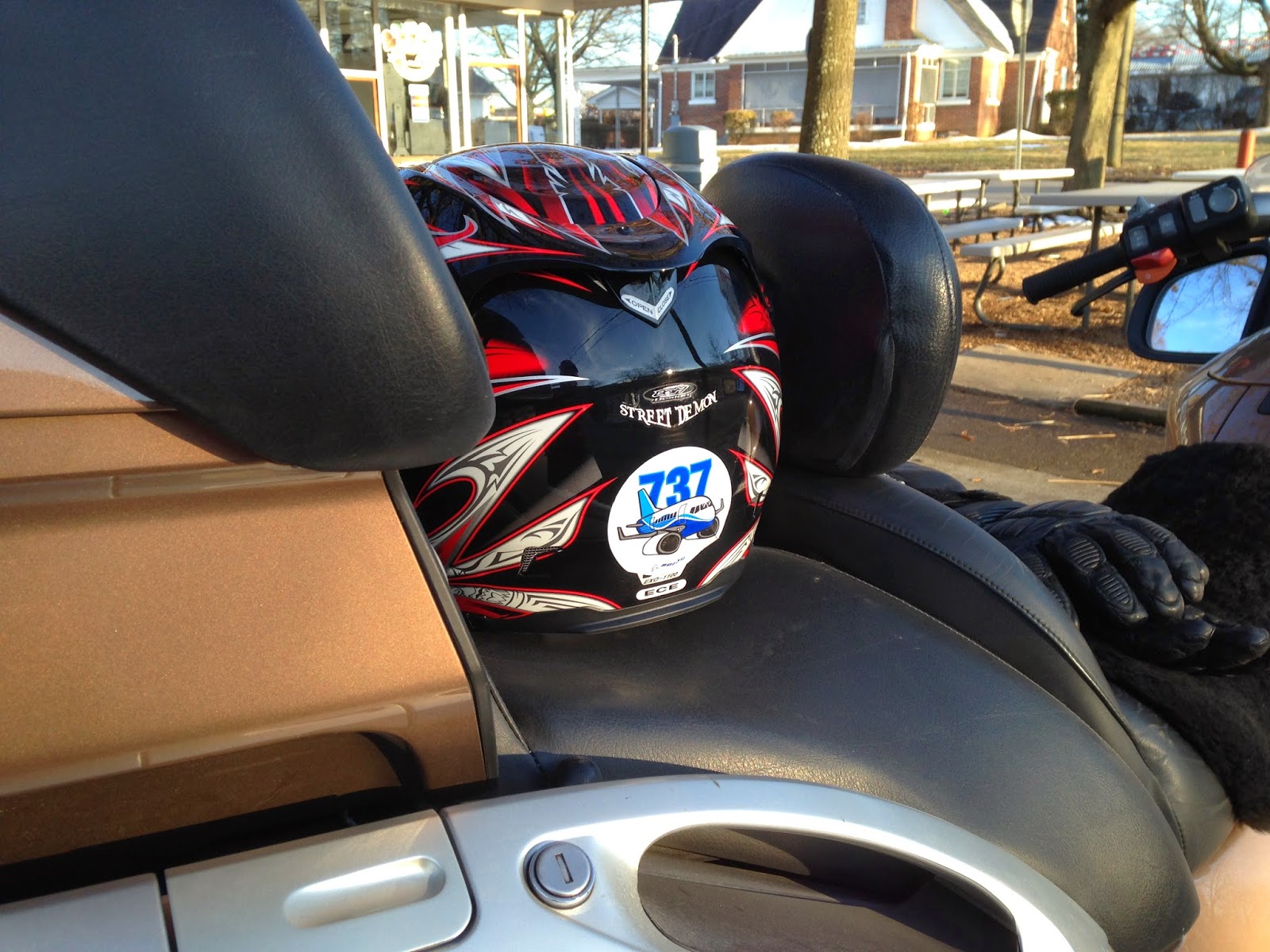