Thanks for Race Sounds


Most people think I have a screw loose because I like to run. Even other runners think I’m a bit twisted because I rarely listen to music when I run. It’s probably true. Anybody who enjoys waking up, lacing up, and running for an hour, is probably a half bubble off level. It comes with the territory. Maybe I’m a little more twisted than most, because I like to think instead of listening to things when I run. The voices in my head become clearer.

On Thanksgiving Day I ran a Turkey Trot. Well, actually, I ran a Fun Run and a Turkey Trot. My daughter went with me to the race and begged me to run the two-mile fun run with her since she didn’t want to run it alone. (Over two thousand people ran the fun run, so she was hardly “alone.”) I gave in. Consequently, I ran the two-mile run with her (in about eighteen minutes), and then hurried back to the starting line to run the 10K turkey trot.

Decartes said, “I think, therefore I am.” When we engage ourselves in activities that make us look inward at our thoughts , it makes us more alive. As I ran that day, I looked inward and thought about all the sounds I would have missed that day if I had plugged headphones into my ears and cranked up my favorite songs.

I would have missed the conversation with my thirteen year-old daughter. Teenagers have amazing, adaptable minds uncorrupted by the rigid thinking of the adult world. They are alive with wonder and insight that adults have long since lost or surrendered to the perceived realities of life.

I would have missed the nervous chatter of the starting line – “Are you ready?” “How fast do you think you will run it?” “I’ve really got to go pee, but the line is too long.” “Dude, I can’t believe you drank all that vodka last night.”

I might have missed the wail of the air horn as it signaled the start of the race and the runners’ cheers, excited to finally start the race. A police siren announced the coming of the lead runners. During the first half mile the street was lined with jubilant spectators coming to cheer on family members and friends. They shouted encouragement and called out names. I could hear the clicking of cameras.

At the first turn one of the race volunteers was telling everyone to stay to the left. A police bullhorn commanded passing motorists to slow down, and I listened to the quiet hum of his BMW motorcycle.

Then as the crowd settled into its pace, it got eerily quiet. I heard the shuffling of feet against the asphalt. I heard the friction of fabric as running shorts rubbed against thighs. I heard the huffing and puffing of racers striving to get air into taxed lungs. The sound of spitting runners spewing their nervous spittle became evident. I heard the quiet hum of passing traffic. In the distance I heard the music at the finish line teasing me and urging me to hurry.

Just before the one mile point a father stood on the side of the course with three small kids and a boom box playing “Eye of the Tiger.” I heard and felt the thumping beat, the encouraging words, and the wail of the guitar. I heard his daughter crying that she was cold. I heard him shout encouragement and tell his daughter to look for Mommy.

At the one-mile point I heard things like, “We need to speed up,” and “We’re doing good.” I swore I heard the ticking of the clock as it mocked me, and my lack of speed, that morning. Just past the mocking clock volunteers were passing out water. I heard water spilling onto the concrete as runners tried to drink on the run and missed their mouths. I heard, “Thank You,” over and over again as racers thanked the volunteers. I heard the hollow clunk of paper cups as they were tossed aside. I heard gasps for air as racers gulped down the last of their water and sucked in air.

As we turned and headed downhill for a stretch I heard a collective sigh from the crowd. I could hear other people’s headphones. Dogs barked from the nearby neighborhood. Conversations started back up among racers. “He was the Vice President of the company until…” “Yeah, I liked that race. It was fun.” “When is the next water station?” I passed a man pushing two screaming kids in a running stroller.

One runner’s cough sounded like a shotgun going off, and he coughed every ten to fifteen seconds. I hurried past, and gladly put that odd sound behind me.

We turned uphill, and I heard a collective groan go up from the crowd. The ever-present habit of spitting got louder. I heard phlegm hocked up from somewhere deep in the thorax come spewing out through heaving lips and splat against the churning asphalt.

The passing traffic on the busy street got louder. I heard myself going faster with an empty bladder. I heard the clock laughing at me, and my attempts to go faster.

The course turned the corner and headed downhill for the last two miles. Shoes scraped against the course as tired legs lost their good running form to fatigue. Some of the runners were carrying helium balloons. One of them popped.

With about a mile left, I could almost hear the music at the finish line again. I looked up and saw a bright yellow sign that read, “Deaf Child.” I thought about the child who lacked the ability to hear all the things I had taken for granted that morning. I gave thanks for my ability to hear, and all the sounds of the race became even more vivid.

I finished the race strong (for an aging fat guy), and savored the sounds of the race – the shuffling of feet, the huffing and puffing, the spitting, the coughing, the rubbing of cloth, the cheering of spectators, the crying of babies, the humming traffic, the roaring crowd, the ticking of the mocking clock, the music at the finish line. The best sound of the race? My daughter saying, “Good job Dad!”

For the record, I do like to listen to audiobooks or podcasts from time to time when I run. 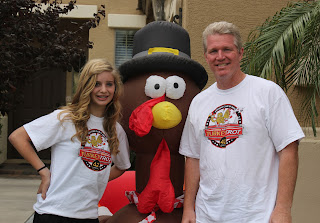 Land of Milk (and honey)

The best biblical compliment given to any geographic location is a simple phrase - a land flowing with milk and honey. Having traveled a bit, I guess you could say that I consider the quality and quantity of a country’s milk a key indicator of its civilization.

Why milk? Milk is a highly perishable product that requires cleanliness, constant care, and daily effort.

To get milk to market first you need keep cattle that you don’t plan on eating, at least right away. That in and of itself is an indicator that the agricultural capacity of a location can support more than subsistence farming. Second you need a stable workforce. Dairy farmers don’t take vacations. Third you need a sophisticated transportation system that includes refrigeration so that you can get the product to market before it perishes or becomes a health hazard for consumers. Last, you need an enforceable health code to ensure the quality and consumer safety of the product.

Yes, you can call me a milk drinker. Having grown up on a dairy farm, you might say that I am a connoisseur of the world’s milk. Since I don’t drink alcohol, I don’t frequent the local bars and imbibe the local beer, wine, or liqueur when I travel. Instead I head to the nearest supermarket and check out to the dairy department.

A lot of locations produce the sterilized cartons of milk that don’t require refrigeration. I walk right by those shelves. I am looking for fresh moo juice. I don’t care if it comes in bags, bottles, or cartons, but it has to be fresh. Fresh milk lets me know that I am in a civilized place.

Next I look for the range of varieties and brands. The more variety, like chocolate milk, whole milk, two percent milk, or any other variation of fresh milk, means more sophistication of milk production. More variety of milk means that this connoisseur has choices, and I like choices.

I also pay attention to the quantity of milk available both on the shelf, and per average container. In the US we find shelf after shelf of gallons of the good stuff. In other countries I might only find fresh milk in liter bags. Since I can drink a quart of milk for breakfast without breaking a sweat, I get a warm fuzzy feeling when I find a dairy department stocked full of cold fresh lactated liquid.

After sampling the fresh stuff, I also look for the milk byproducts like butter, cheese, yogurt, or ice cream – especially the ice cream.  Statistically speaking they have proven that people with more education and higher IQ’s eat more ice cream. It doesn’t surprise me since ice cream is the highest form of milk byproducts. I’m just not sure if smart people eat ice cream or eating ice cream makes you smart. I will have to continue my research.

I recently returned to Lima, Peru, after fifteen years. One of the first things I did was head to the nearby supermarket and check out the dairy section. I was pleased to see that both availability and variety of milk have improved in my absence. I took great pleasure in sampling the various fresh milk products delivered in one-liter bags. I enjoyed the drinkable peach yogurt produced by Gloria. Of course I had to sample the D’Onofrio ice cream that street vendors sell everywhere. (Based on the ubiquity of ice cream vendors in Lima, they must be some of the smartest people in the world.) After several days of assessment, I would say that Peru has made tremendous strides in the last few years. It has become a land flowing with milk, and that is progress you take to the fridge.

Yes, I’m a milk drinker, a veritable connoisseur of cow juice, a maniac for moo-moo, a disciple of dairy. For me, nothing says “civilization” like a large, well-stocked dairy section in a grocery store. To say that a land flows with milk is a compliment of biblical proportions.

(No offense meant to all you fans of apiculture. I love honey too, but for me, milk is the bee’s knees.)